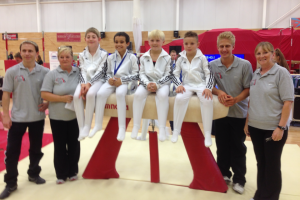 The 2013 London Men’s Open / Development Open Championships took place from the 6th – 8th September at the Europa Centre in Kent.

The competition saw some of the countries youngest gymnasts battling it out in various categories.

The boys all deserve massive praise as it was not a smooth journey down to the competition. Jamie, James and Lewis departed from Newcastle at 10am and did not arrive at the hotel until 12.30am the following day. Kyle left Newcastle at a similar time and did not arrive until 2.45am in the morning. All boys were up for breakfast and at the competition arena for 7.30am.

The results were fantastic with a considerable improvement from their previous competitions. 44 gymnasts competed in the London Open Loveday cup and Jamie Carpenter finished 11th overall with a score of 72.700 with a fantastic floor routine, placing him 5th overall on floor with a final score of 13.300. James Hodgson (14 years old) finished 25th with a score of 62.300, an extremely good competition as he was up against gymnast who were 17 years old. Kyle Barnes competed on 3 pieces, Floor Rings and Vault. A clean floor routine would have seen Kyle up there in the top 10. However as a gymnast knows a few falls can be so harsh. But he continued with his competition and finished with a 12.6 on vault. Lewis Graham represented CNGA on Floor and vault and scored 2 good scores 11.15 on Floor and 11.9 on Vault.

In the afternoon Harry Ross represented City of Newcastle Gymnastics Academy in the Clayton Cup. Harry finished 30th overall from 40 gymnasts. Harry had a solid competition on Floor, Rings, and Vault & High Bar. 3 falls on pommel and a P-bar routine that Harry knows he can do better lowered his overall score by 6 marks and would have put him into the top 20.

Over the past 3 months all the senior boys have worked extremely hard under their new head coach Misha and they continue to grow and improve each day in the gym. It is a fantastic time to be part of the CNGA Men’s artistic gymnastics programme with dedicated coaches who are always striving to allow the boys to be the best they can be.

On Sunday 8th September our Level 1 & 2 gymnasts represented the club at their first national competition in the London Development Open. Mackensie Horton has been training for just over a year at CNGA and finished 26th from 52 gymnasts with a score of 47.475. George Ross finished 16th with a score of 50.150. Kurtis Rutter scored 50.400 and finished 14th.

Freddy Nelson scored 51.675 and finished 10th overall. Not only did Freddy finish 10th but won Gold on vault with an impressive 9.75.

In the evening session Martin Bland took to the floor in the Level 2 competition. Like Mackenzie, Martin has only been training in the Boy’s squad for over a year. With a score of 48.55 Martin finished joint 24th from 42 gymnasts.

A fantastic weekend all around with some extremely positive results. All the coaches are enormously proud and can’t wait for the next competitions.